JavaScript is disabled for your browser. Some features of this site may not work without it.

Athens and the war on public space : tracing a city in crisis 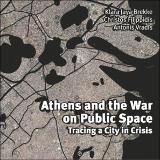 Sometimes, the maelstrom of a crisis can be captured in a single image. The image of the mundane, barely noticeable movement of an urban dweller as they go about their everyday life. Athens and the War on Public Space commences from images just like this one, collected over a two-year period of research (2012–2014) in the Greek capital city. These images, gathered by a team of artist-researchers working to trace and study crisis-ridden urban public spaces in Athens, Greece, create a visual timeline for navigating through all that happened over those two troubled years. The resulting catalog shows how images of shipwrecks and disaster were used to harden anti-migratory policies, and how these exact policies then helped to foster the hatred that spilled onto the streets of Athens, in the form of racist attacks. Athens and the War on Public Space further outlines the violence inherent in the images of silent commuters going about daily life despite the catastrophe, caught in the freeze-frame of inaction as the world around them changes beyond recognition. The carefully curated images show how the crisis was quite literally played out in the city of Athens, especially vis-a-vis its performative construction in the images of anti-migratory policies, state repression, and their material, grave consequences. Athens and the War on Public Space is ultimately a collective portrait of a city caught in the whirlwind of crisis. The book is a compilation of work done during the larger Crisis-Scape project. The team comprised Klara Jaya Brekke, Dimitris Dalakoglou, Ross Domoney, Christos Filippidis, and Antonis Vradis.

Copyright © 2018 the Author(s). This work carries a Creative Commons BY-NC-SA 4.0 International li-cense, which means that you are free to copy and redistribute the mate-rial in any medium or format, and you may also remix, transform and build upon the material, as long as you clearly attribute the work to the authors (but not in a way that suggests the authors or punctum books endorses you and your work), you do not use this work for commercial gain in any form whatsoever, and that for any remixing and transfor-mation, you distribute your rebuild under the same license. http://creativecommons.org/licenses/by-nc-sa/4.0/

Items in the St Andrews Research Repository are protected by copyright, with all rights reserved, unless otherwise indicated.